By the time 2020 swings into view the number of songwriters and original songs in existence will have hit unimaginable numbers. Well, perhaps not quite unimaginable, everything can be imagined. (At least everything we already know…)

Truth is, there are plenty of angles you can come at it from. Here we intend to lay out a few helping hands – stepping stones, if you will, to lead you towards achieving the blissfully satisfied mind of an unstoppable songwriter.

Here are 25 songwriting tips to get you started.

1. The number one tip for songwriting, for anyone who wants to improve or perfect their craft, is to make sure you’re writing songs EVERY SINGLE DAY. It doesn’t matter what it is, how good it is, what it’s about – the key is to master the art of DOING. Build a habit – keep writing, write something before the end of each day; even if it sucks and you wind up deleting it, the point is to exercise those writing and creating muscles as often as possible. They say habits form after just 30 days of repetition – get yourself into a position where writing comes naturally; where you can’t not write something before the day ends.

2. One of the best tips for songwriting is to take a well written song that you like, switch the key (minor to major, or vice versa) and make up an entirely new melody alongside of it.

3. Strong songwriting advice has always been to collaborate with others – write with a friend, a fellow musician, or a stranger from the web if preferred. In fact, why not try all three? New parts of our style and artistry come out when we’re forced to unite and work at something creative with another mind – often times the very best of our abilities start to pour through. Make it a team effort!

4. In terms of songwriting tips for beginners – keep a notebook to hand. Write things down in the car, on your phone even; record snippets of ideas throughout the day – lyrics, melodies, chord patterns, creative thoughts, wild and wacky drum patterns, etc.

5. Know what your song will be about – have intention when you write, gauge how you’re feeling and what’s been consuming your thoughts lately; that’s where your emotions are right now, and that’s where the realness will happen – the songs that connect and that matter to you and your audience alike. Lyrics and musical mood both should reflect in some way what it is that you’re creating as a reaction to.

“It is only natural to pattern yourself after someone… But you can’t just copy someone. If you like someone’s work, the important thing is to be exposed to everything that person has been exposed to.” – Bob Dylan.

6. A well-known songwriting tip is the easier said than done KEEP IT SIMPLE. Get the idea down, just your voice and an instrument if that’s how you roll, then build upon it from there. Don’t get bogged down with production details before you’ve even captured a moment or fully developed the essence of why you’re writing this song.

7. Know your craft – music comes from the heart, but there are several technical aspects to playing and creating that are well worth learning and mastering over time. The more you play, alone and with others, the better connected to and understanding of the musical process you’ll be. The more you know, the more creative and freely expressive you can get when writing songs. Take lessons, learn how to be the best at your instrument, or at singing, or at production. Read more, too – lyrics are language, and music fans often love a lyric that expresses something familiar but in a new and complex or obscure way. Broaden your horizons by broadening your knowledge.

8. Not all of the songwriting ideas in this feature will be professional or obvious, but sometimes even the silly ones can work their magic in their own way. A good example is this – leave your phone recording, audio or video, while you commute – long drive, train journey, a walk. Keep it quiet or just don’t worry about who can hear you – record little fragments of things you see; what catches your eye, what thoughts or memories does it trigger, how did you feel, what did you notice next? At the end of the day, listen back through it all and start playing – start singing, start formulating a new and poetic, musical way of saying what you saw or what you went through.

9. Don’t overthink – relax and enjoy the songwriting process. If you don’t like what you write, move on to the next thing. Nobody’s judging but you! See what your subconscious creates when you let it run wild. No concept is too out of reach, just go with the flow.

10. Set yourself a time limit – YouTube has seen the rise of the one-hour song videos lately, get inspiration there if you like, but a better option is to simply dive into it right now; no influences, no outside input. Set the timer for one hour, and know that your song has to be finished within that time – that’s a verse, a hook, a bridge, and whatever else you decide makes a full song. When time’s up, that’s it – there’s your song. Scrap it or polish it up and share it with the world.

“Those in power write the history, while those who suffer write the songs.” – Frank Harte.

11. It might seem a little ‘out there’, but chaotic background noise can be quite stimulating for the mind – turn on a bunch of different radio stations or videos. Not all songwriting tips involve quiet – make it noisy!

12. On a similar note, a personal favourite tip for songwriting is to take a trip on a fast train and write amidst the noise and atmosphere as you travel; this one’s good for isolating yourself and getting on with the task – and incorporating a little real-world / people-watching.

13. Sticking with isolation – try not talking for half a day. Keep your thoughts in, no journaling, then get to the songwriting session and just roll with it; set a beat or pick up the guitar, or just start writing.

14. An often overlooked songwriting tip but a crucial one is to dive head first into creative freedom. What this means is, write as if no one will ever read or hear the song, so you’ll be writing exactly what you mean to say, and letting the melody and chord progression move wherever the moment or emotions mean for it to go. 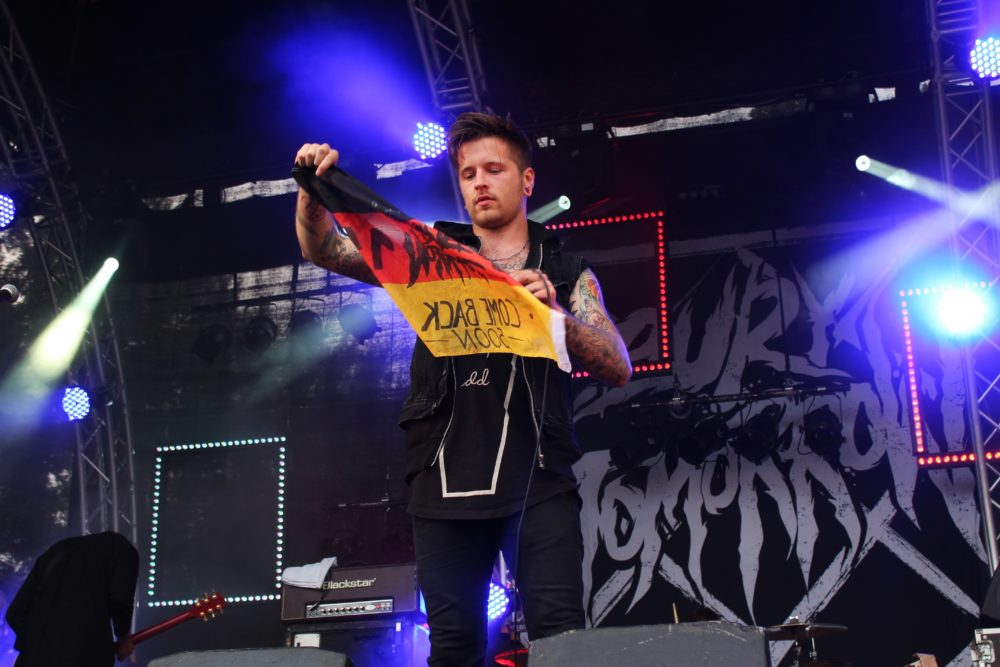 15. A good songwriting tip and general tip for improving your musical abilities – start somewhere new. If you’re a guitarist by nature, write a song at the piano; even if you can only hit notes, you’ll still have a melody and a mood. In fact, you may even stumble upon something way more interesting, as you won’t be stuck in the same traps and loops you tend to fall into with you primary instrument. If not piano, try another instrument, or Logic, Ableton, Cubase – whatever your DAW – or just write straight from the mouth.

16. A fun one to get you thinking – Consider a song you love and consider its topic. Try to write about the same story-line, but express each idea or moment in a completely new way. This could be poetic and ultimately harder to decipher, or it could be more obvious or quirky.

17. An obvious but often forgotten songwriting tip – record or note down EVERYTHING you write. Even snippets of a tune, single lyrics – get them into your phone or notepad and keep a record of all of it. Years down the line you might stumble upon the missing idea from your new piece – or be suddenly inspired to finish something older. If nothing else, you won’t regret being able to see who you were and where your head was at years earlier.

“I hereby grant you permission to write crap. The more the better. Remember, crap makes the best fertilizer.” – Pat Pattison.

18. Use an app. Modern songwriters often like to speed up the writing process. There are apps and websites that can help you find rhymes for your songs. It’s not as organic, but if language isn’t your forte there’s no harm in seeking a little nudge in the right direction.

19. A slightly harder songwriting tip is to attempt a totally new genre. Listen to a few tracks from a genre you would normally not listen to, then take to writing your own. You can switch it back to a genre you prefer once it’s done, and you might find that a whole new world of ideas pours through in the new setting.

20. One of the simplest but most ignored of songwriting tips – keep your work-space clear and tidy! A tidy desk makes for a tidy mind – clear your room, clear your head; get creative without distraction!

“Songwriting is a bitch. And then it has puppies” –  Steven Tyler.

21. In the style of David Ford’s infamous Go To Hell loop-pedal clip (watch for inspiration), start making sounds and rhythms with house-hold items. Click the kettle for a beat, get the spoons out, click a pen, tap the radiator with a capo – experiment with sound and create a weird new mood.

22. Maybe a tricky songwriting tip but, don’t get bogged down with a dead-end. If the song isn’t going anywhere and is frustrating you – set it aside, save your progress, and go listen to or write something completely new. Whether or not you come back to it is up to you, but take a long enough break that you stop thinking about it entirely.

23. Enroll on a course – a bigger endeavor of a songwriting tip but a worthy one if you’re passionate about the process. There are songwriting groups and courses in most cities. You’ll meet other musicians, you’ll learn, you’ll be focused on the craft, you’ll get inspired, and it may even open up a whole host of doors for you as a songwriter.

24. Of the well-used songwriting tips – attempt a remix! Take a song you like, or one you hate, and re-craft it. You’ll improve your production skills and you’ll learn how to take an idea and turn it into something you love.

25. Write from the perspective of someone else. A fictional character, someone you see on your daily commute, a family member, someone you’ve fallen out with. Become somebody else in your mind, then write a song exactly how you think they would write it. Commit to this songwriting tip – become them, even if you don’t like how they do things.

Remember – songwriting is fun, it’s therapeutic, and it’s something a whole lot of us have in common. Enjoy the process, and if you’re still struggling – check out a few songwriting ideas for kick-starting your creativity after writer’s block.

Let us know in the comments how you get on – or if you have any tips of your own.