In keeping with our frequent discussions around the concept of Real Music, we take a little look today at a brilliantly talented musician and songwriter based in Greater Manchester, UK.

Paddy O’Hare writes and performs for the most part around the North of England, but this particular year he’s traveled as far as the French Alps and Italy to play. He performs not just as a solo artist, but with his duo/band Mike Sweeney & Paddy O’Hare with the Collective, and also with his band The Replicants. You might have seen his name around, but if you haven’t yet heard his music, this is not one to be missed – keep reading, press play, and stay locked in with all the relevant social links. 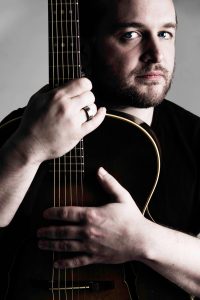 I’m lucky enough to have seen Paddy perform a fair few times, and it has to be said – he never disappoints, regardless of venue, audience, equipment. Day in, day out, a stand-out show is what you’ll get. A mesmerizing and powerful projection of music.

When I first saw him play, the initial thing that caught my ear, and what I went home raving about, was his superb arrangement and performance of Billie Jean; which was, by his own admission, inspired by Chris Cornell’s version, but still, entirely re-vamped and re-empowered by the UK Songwriter. It’s the kind of thing that immediately grabs you, clutches at your attention til the very end. There’s a stunning recording below, but the truth is you have to catch him performing it live. The whole thing is fantastic, but the utter strength of that vocal will completely blow you away. Turn it up loud.

The great news is he’s hoping to release some new recordings with his band The Replicants some time next year, so give him follow on Facebook, Twitter, and Soundcloud to stay updated, and get yourselves down to a gig as soon as possible. Guaranteed to be an outstanding evening of live music, and in general, a top guy to be around – always a massive bonus with live music.

As a song writer he’s up there with the best of them. Break The Block is a little beast of a track, another top quality vocal accompanied by even more captivating guitar work. It’s an uplifting song with some brilliantly clever lyrics..

“You better not be content, it’s the enemy of invent”

The writing makes you feel the need to listen more than once, to make sure you grasped it, and to lose yourself in the ideas. Wayne is another stunner from the Blue Thatcher catalogue, with a hypnotizing piano riff and outstanding vocals, as well as some superb imagery and really thought provoking lyricism when you really listen past the music – the same is true of Gentle Surprise..

“When you find your nerves turned inside out..
..she shows you your way out

now your life’s in quiet desperation and
she shows gentle surprise..”

And then it smashes hard into the chorus, taking an unexpected yet welcome turn, melodically, and even rhythmically. Fantastic song crafting, really effective structurally, and an intriguing and relatable concept. Listen to it once or twice to get swept up by the story.

Go forth and find more music. Get down to a gig. Show some love. You won’t be disappointed. Turn this one up loud, too.