The self titled debut album from Mike LePond’s Silent Assassins is an immense collection of songs encapsulating everything that is great about rock music. The musical skill is consistently prevalent, as is the drama, the experimentation, the quick-fire finger-style solos, the incredible drum patterns. It’s refreshing to hear something with so much effort and thought involved in it. The level of experience is clear and strong, and the music is so wonderfully varied that from one track to the next it really feels like a feat of epic proportions.

Apocalypse Rider opens the album up, and it sets a scene of superb high volumes. The storytelling shines brightly, though it is the musical creativity and performance in all areas that steps forward more noticeably on first listen. It’s a memorable song, the intro alone is intensely powerful – the guitar riff and the drum beat crash out and collide with each other in an alluring, even enchanting manner. Everything is heavy and big sounding, with just enough of the gentleness scattered around to keep it accessible. 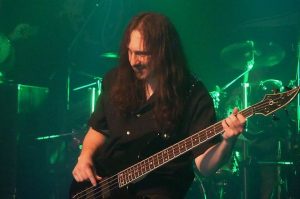 After the initial hit of this classic rock and metal introduction to the album, the beauty that was touched upon comes out of the shadows and softly but surely surrounds you as you listen. There’s a brilliant sense of culture within much of this music, Red Death in particular seems to cross paths with the medieval, perhaps even oriental sounding at times, before kicking back in to that solid rock sound that we yearn for.

A good point at which to mention how well put together the album is – song choice and arrangement is important, but lately it has taken something of a back seat within the music industry, people rarely seem to listen to albums in their entirety anymore. Which is an utter shame. In many ways, this is one for playing from start to finish, uninterrupted. At the same time though, you could quite easily take any one of the tracks and whack it on the sound system to hit things up a notch. Any venue, any setting – this music would raise the adrenaline of all who heard it.

The album as a whole, as a single piece of art, is something we should try to hold on to. This project expresses an array of stories and musical exploration in such a way that it all combines and fuses together to build a rather epic audio film of sorts. The song The Quest, for example, touches on that beauty, that gentleness, in the beginning, then slowly mutates and evolves into this 80’s rock highway of manicness and melodies. Brilliant melodies, too.

The structure is clever, not something to go unnoticed – this isn’t just rock music, this is song writing, these are carefully composed arrangements of sound. The ending of The Quest highlights this even further, the softness of this almost fairy-tale like melodic riff, followed by a stunning set of harmonies and claps. It’s a track that does indeed take you on a quest as you listen, and every road you travel down has something new and impressive to witness. What’s been made here is something completely extraordinary, and not a moment has been wasted or slept upon. 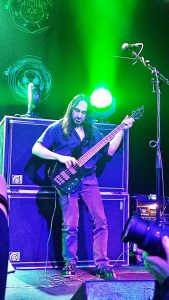 Amidst the creative exploration that is showcased throughout, there is also the familiar thread of that classic rock sound holding it all solidly together. Ragnarok is perhaps a highlight, the riff kicks in and it’s one that immediately gets inside your mind. The vocal is raw and powerful, the storytelling is superb – the imagery is so clear and descriptive, it sets the scene without flaw, and the musical playfulness surrounding it all makes the whole thing feel like a fantasy film in it’s own right.

The project closes with the track Oath of Honor. The simplicity of the guitar flows out and around you, encompassing your whole being and filling up the room. The organs come into play, and the riff moves from freehand, almost acoustic jazz-like, to this strong standing melody that makes the whole thing just fit together perfectly. Everything added enhances the beauty of the moment, and yet still, you know that rock blast will come. The story can’t progress without it. And it does not disappoint.

The album ends as any immense work of art should; with a bang, a conclusive crash – an ending that reminds you of everything you’ve just been through, then picks you back up and ushers you off into the world again. Nothing else sounds quite as powerful once the music stops. It’s a strong album, an impressive expression of ideas and musicality. It stays with you long after you’ve listened. Check it out, this is the opening track, Apocalypse Rider..

Everyone involved in this project has played their part fantastically. There is nothing weak or withdrawn within it, everything takes it’s moment by the horns and utilizes the opportunity to shine. The whole creation and release was instigated by the one and only Mike LePond; bassist for the infamous progressive metal band Symphony X. You can find Mike LePond’s Silent Assassins on Facebook and Soundcloud to stay up to scratch with new releases. Make sure you don’t miss out on a live show if and when the music is taken on tour. That will be one hell of a show. The album alone is well worth taking the time out to experience.