Considering the twelve month time frame, Alien Skin’s early 2016 album Winter On Mars is notably different from the year’s later release European Electronic Cinema. As the opening and title track begins, the sound has a lightness, but the synths and the rhythm have a certain energy and drive that is heavier, and somewhat unexpected. If ever people were born to create – destined to make art, to express and clarify for us the profound parts of life we so frequently misinterpret; George Pappas was unquestionably one of them.

The leading voice on this project has the brilliance and familiarity that always works so well. The female harmony adds a lot, but there is still that unusual switch from the joyful to the melancholy that Alien Skin so uniquely manages to master each and every time. The music on the whole strikes as just a little bit more indie in this case.

The songs have a hard sound of reality to them, seemingly an alternate reality, though often heart breakingly real when really paid attention to. The melody of the opening track is instantly addictive, and these lyrics about alienation – addressing a second person, or you, the listener – really draw the mind to focus on the theme. The Empty Wait continues this new and unique sound with awesome relevance, but the song itself is so more cinematic now; the rhythm is not so easily noticed, but the musical build up is as creatively brilliant as ever. Alien Skin creates these songs that seem so much more like short movies or dreams than four minute tracks. It’s a skill that transcends style and shines brightly regardless of the musical setting in question.

Language Of Love follows The Empty Wait perfectly. The rhythm returns, with it’s part organic, part industrial sounding core, and then this huge hook section – followed cleverly by a mood altering bit of saxophone – waves it’s melancholy white flag and fills the room with feeling. Jasmine keeps the jazz element topped up; still leaning towards the electronic world of musical freedom, but with a distinct and effective atmosphere that takes you wherever the music may go. The words themselves sound a little like Jazz Man on occasion, which furthers the feeling of a vintage jazz cellar bar somewhere down town. To listen fully, of course, is to witness the beautiful imagery and storytelling that never fails to captivate within Alien Skin’s songwriting.

Happier Than Blue develops on this further. The concept is classic Alien Skin in that it’s so completely removed from the norm or from what’s expected. The artist’s way with words is stunning, always unpredictable; always the sort of writing that at first confuses, then later makes you realize the point of it, makes you understand the idea, and perhaps wish you had thought of it first. Instrumentally this track has an uncommon, indie hypnotism to it that sounds impossibly real yet dreamlike. Another of the many ways in which the artist breaks down the walls of what’s expected and walks the path much less traveled by. 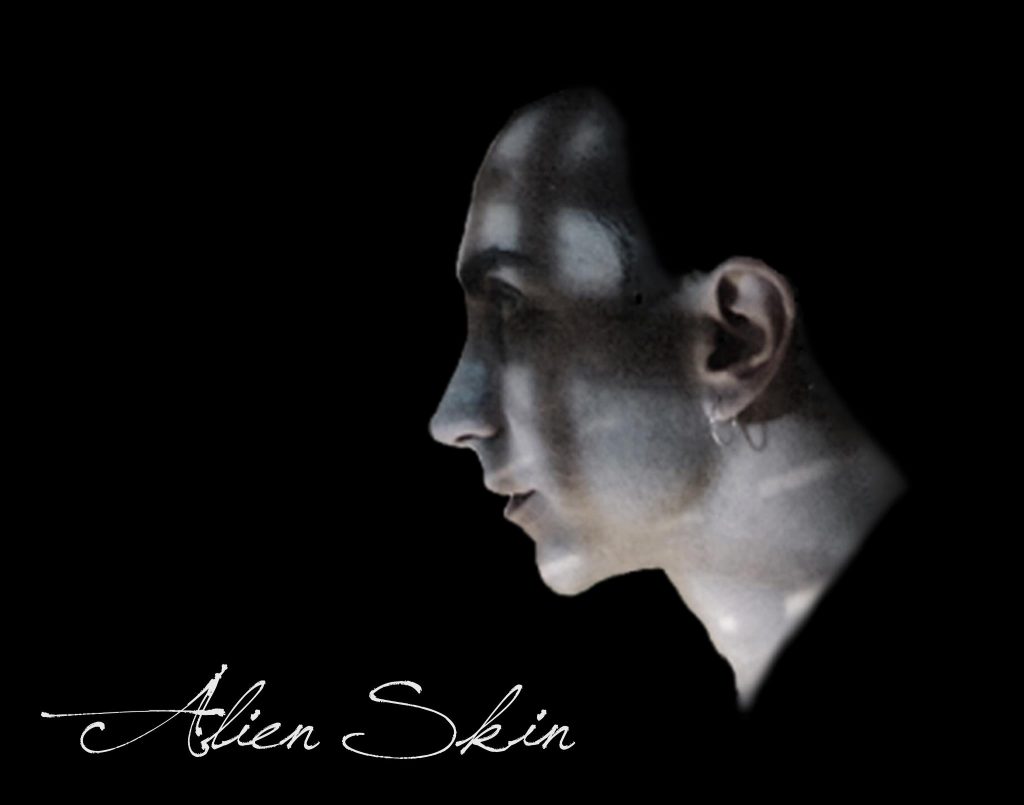 Mother Of Mine is a bass-driven fusion of cinematic style and heart breaking, emotional reality. The songs the artist writes are so consistently original that there’s very little to compare it all to. Each time a song begins, the sound is fresh, familiar, always relative to the creative mind, but always once again brand new. The melodies are wonderfully unique, yet still effective and warm and memorable. The ideas are the sort of thing most of us would love to talk about, but never find the time – or perhaps the bravery. We so often shy away from depth and forever lean in favour of small talk. These songs are a green light for abstract thought and genuine, deep running emotions.

She’s Paper Thin further emphasises this point incredibly well. A beautiful song, a great energy, yet once again – there’s that something, that reality just beneath the surface, always reminding you that things are never quite what they seem. There’s always some level of complexity to each and every situation, and it’s striking to hear it all expressed with such skillful, artistic wonder. The Penny Whistler takes things even further in this respect. Patch Of Grass yet another example, with it’s talk of the urban mess. The Song has a beautifully folk-like centre that could easily convey these ideas via a purely acoustic, intimate live performance – something that’s actually true of many of the songs on this particular album. It would be a pleasure to witness the collection performed in this manner.

An often notable thing, perhaps about all of Alien Skin’s work, is that the songs don’t simply comply with the verse-chorus, verse-chorus structure or industry standard. They do have incredibly effective structures, but the music and the melodies, the notes chosen, continue to build in intensity throughout – right up until the finish point. It’s a rare way to make music, particularly vocally and lyrically weighty music, and this is a shame – it works so well, it creates such a powerful soundscape that has a huge effect on you as you listen. Admittedly, if the balance wasn’t quite right, this sort of experimentation could be disastrous, but that’s never a concern with Alien Skin. Have confidence in the artist’s work and the results are immensely rewarding.

The collection leaves you behind as Mars Epilogue tip-toes past and away, with it’s chamber of reverb and snippets of an alienation themed dream – only a feeling of emptiness or longing remains as reality storms back in. The imaginative nature of these songs is superb, and the atmospheric instrumentation surrounding and underlining the concepts is always appropriate and striking. Winter On Mars is another incredibly creative and compelling project from Alien Skin.

Take home the album, or in fact, take home Alien Skin’s entire discography over on Bandcamp. Find and follow him on Facebook and Twitter. Check out our previous write-ups for the albums Creature With The Human Face and European Electronic Cinema. You can also read our in depth interview with Alien Skin or visit the artist’s Website for more information.