First you hear a track called ‘Mammon’ – a live version, with a video, and you become obsessed. The seductive, gravelly vocal and snappy guitar rhythm draw you deep into a chasm of double bass heavy, yet, minimal, uncluttered music. It’s a song you don’t even understand the meaning of, but will be infatuated with for the foreseeable future.

Then you Google them, spell the main man’s name wrong, swiftly realize the error of your ways – or are in fact cleverly redirected by the band to the correct place (I’m going back a few years, but that was a delightfully comforting little feature). They’re a big deal that you’ve missed out on for way too long. 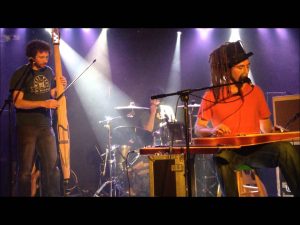 Next you watch them play a live set, during a sunny afternoon at Greenman Festival, perhaps; somewhere in the heart of South Wales. It’s nothing like you expected, and so much more than you had hoped. And suddenly, three years have passed, and you’re a die hard fan – never quiet about it, and with no intention of bowing out of the bandit power crowd.

It’s dramatic; cello, big beats, bass, slide guitar, distortion. There’s nothing else like it. Wille, Drew, Matt. Blues, rock, roots, folk.. whatever you want to call it; their style is their own – you hear Wille and the Bandits from across the field and you find your way over there in an instant. Those are the rules.

They’re loud, they’re meaningful, they’re a master of their art, and they’re damn nice guys – what more do you want?

Wille and the Bandits are a band we all need to see way more than once. They’ve perfected their craft over recent years, they tour regularly, and from what we can tell – they remain down to earth, they remain humble; exactly the kind of musicians we need more of in the world.

Wille and the Bandits. Follow them on Facebook, Twitter, and in real life (in a legally allowed, non-creepy kind of way) Visit their Website to find a gig near you in the coming months.