The opening line to the entire album that is Lake City Rockets is one that sets the scene pretty perfectly. The presented concept, the warmth of the music, the character of that leading voice – it all works to intrigue and calm you in the very same instance. 3 Love Songs is a fantastic song, perhaps one that takes its time to show you this – the build is gradual, natural, but when it hits; it’s an incredibly beautiful piece of artistic writing and performance.

The Recreationalists have a gorgeously creative sound that brings together elements of organic folk and indie-rock, in a classic, slightly vintage but currently refreshing manner. The opening song was the perfect choice, the hook is immediately addictive, the rising intensity sweeps you off your feet, and the leading riff – sounding almost like a flute or a pan-pipe – is something that appears unexpectedly but that satisfies brilliantly once you hear it.

Throughout the rest of the album, expect great songwriting but try to free your mind of any other predictions. From Finding You Like This through Take The Time To Call, the music is set-up with considerate style and relevant levels of emotion. The songs have been written from the heart, the story-telling is both accessible and personal – intriguing, and on point in terms of reaching out and connecting to listeners even thousands of miles away. The latter of these two songs has a big-ballad feel that it seems a crime not to have heard before.

The Recreationalists know how to write great melodies and how to frame these between optimistic instrumentation and an overall sense of unity between players that really helps the vibe stand tall. The music moves you, every song has some sort of emotional effect, which by the end leaves you feeling as if you’ve just completely re-evaluated your existence and are ready to take steps in a new direction. 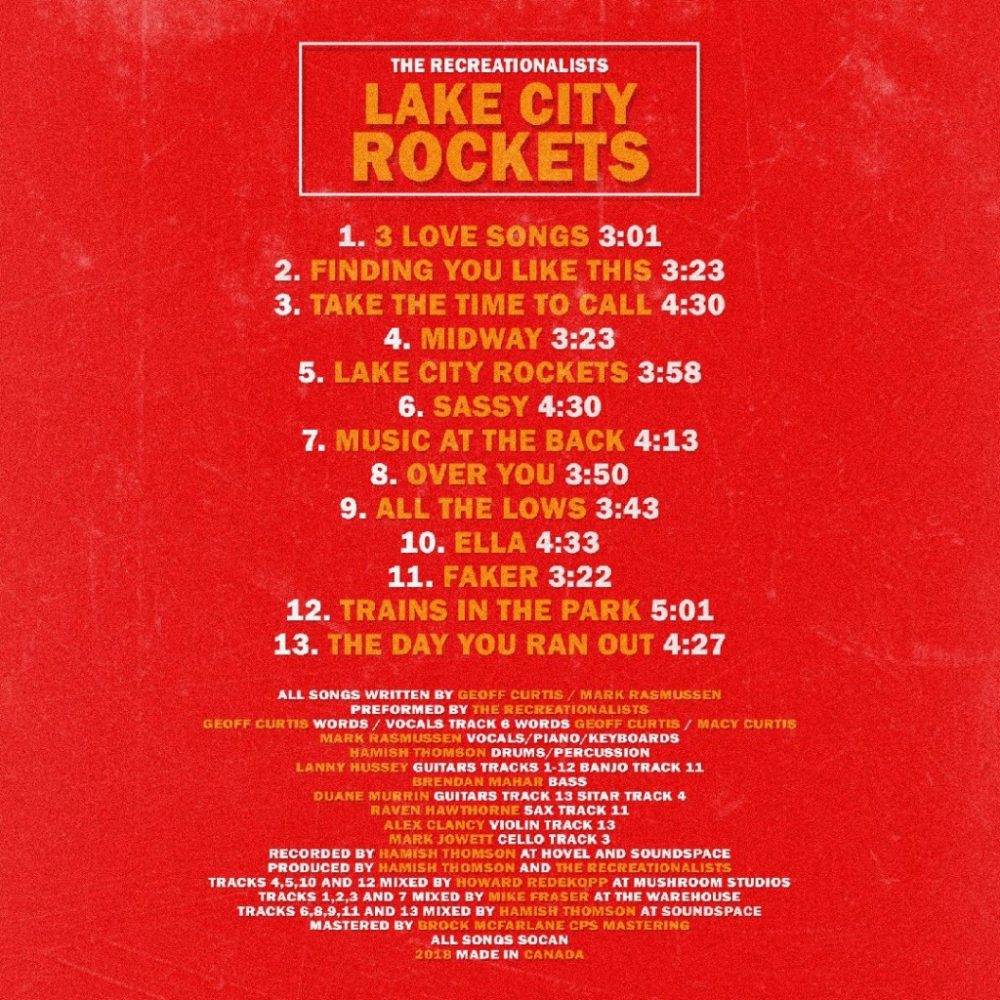 There are far too many great moments to mention in a single review, you really need to hear the album for yourself. Midway introduces a Beatles-like style of writing and some quirky instrumental flickers that add emphasis to already appealing lyrics. The album’s title track sees a gentle shuffle of sound come through, a lighter feel, a piano-led progression that totally soothes the soul. By this point, the instrumental choices feel familiar, you feel comforted by it – they are a crucial part of the thread that is the now unmistakable sound of The Recreationalists.

Sassy brings in, and not for the first time, a slight Elton John aura – the opposing sides of the melody, the piano, the story-telling, even the vocal inflections to an extent. The song has you holding close to every line to see how things develop. Music At The Back follows and completely switches up the energy and the mood. A retro dash of distortion drives things, followed soon after by an ocean of elements that help to create something incredibly compelling and again impossible to turn away from. The two voices together add a sense of urgency, the song on the whole has an addictive quality – the contrast between the melancholy melody, the emotional lyrics, the togetherness of those voices, and the mildly manic sound of the drum – it’s a really unique and powerful song that’s easy to listen to three or four times in a row. This is, actually, something you come to discover about a lot of the songs on Lake City Rockets.

Production wise, the songs on this project are all real moments of expression and musicality well captured. When the sound is big, it hits with impact – it’s clear and heavy, it works to uplift and energize. When the sound is gentle, such as during Trains In The Park, the clarity and the space are equally captivating. You feel as if the singer is right there in the room with you. In both cases, contrast works well to make things shine brightly. The band have arranged this album thoughtfully, and it shows.

The Day You Ran Out marks the final moment of the project in a manner that again sets a powerful scene that compels you to listen intently, which is easy to do. This album is escapism in both the warmth of the music and the fascinating stories that pour through. It brings together the best of both worlds – every song impresses and connects in some way. It’s a beautiful collection and The Recreationalists are superb songwriters. I look forward to listening throughout the coming months, and hopefully catching a live show some day.