Having written about and been a fan of two singles from Smoking Martha so far, the prospect of a full length project held huge appeal. The band have a way with songwriting that seems to connect brilliantly with the energy and passion of their musical performances and creativity.

So Lonely, the opening track from their brand new album In Deep, is an insanely good place to start. Everything that draws you in about the band is alive and thriving here – the energy, the passion, the riffs, the intensity, the leading vocal power. In addition, the thing that really works about this – what an incredible hook. The band know how to write songs, how to craft them, how to play for the passion of it, and the result is gripping.

The instantly recognisable Say You’re Mine follows. Even by this early point within the album, it’s a joy to find yourself lost in an ocean of the band’s sound. Tasha D’s voice has the style and character that indie rock and roll has been craving for quite some time.

Next up is the structurally satisfying To The Stars. The instrumentation is detailed and varied, as is the vocal melody, and there are distinct moments within which the fullness of the sound falls away, laying bare the voice, and then, in an ever powerful contrast, returns at full speed to soak you in its energy and swagger. For a band with such a memorable leading vocalist and a memorable image – everything from the name to the way they present themselves and perform has a notable style to it – the fact that they have thoughtfully and skilfully written such a complex and creatively brilliant collection of songs, is the absolute icing on the cake.

Ebb Of The Tide is another huge track; heavy, dark, mysterious, loaded with imagery, flawless in its musical execution and hypnotic in its build up. Then you get something of a more classic rock and roll driven moment with One Night. The subject matter and the insanely entertaining guitar parts here fuse to make a truly powerful few minutes of music. 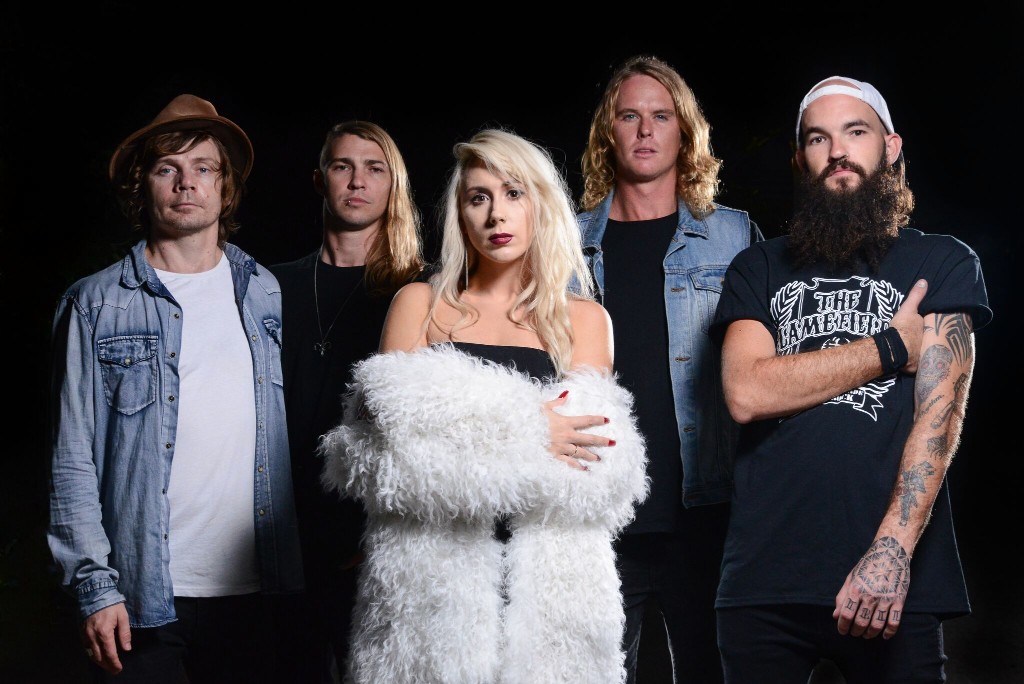 Smoking Martha are categorically the kind of band you’ll ache to see performing live after spending even just a little time with their music. The great thing about this album is that there is a phenomenal level or variety; always keeping you interested, yet always maintaining that authentic sound, that truth – that certainty as to who the band are. Baby Let Me Go, for example, is a very pure and acoustic recording that comes as a gentle moment of vulnerability in the centre of the surrounding volume. And still, Tasha D’s voice keeps the thread alive, as does the lyricism; the reflective and emotional nature of the lines. The track hits with impact and the build up towards the end is stunning.

Follow is a dark and seductive song that comes through with a compelling level of drama and intrigue. The hook is sensational, there’s so much power in these single lines, and the space surrounding them is skillfully filled up with intense and mesmerising musicality. The same is true once again for Find a Way. This song bursts into life with a superbly infectious bass line and yet another display of complex and mighty instrumentation. The structure of these songs means that you hang on every moment with intent and wonder. Everything about the music satisfies, but none of it complies with the standard or suggestive rules as to how an effective song should go – the band just make the music they need to make. The unique nature of their songs is something that hasn’t come through with such drama and detail and passion in a long time.

What’s Her Name comes as the penultimate song on the album, and Stranger Things offers the final few moments of energy and unwavering velocity. It’s a big way to finish, the chant of We Fight has a lasting power that screams out for you to get involved. This entire album is a refreshing collection of songs and a strong reminder that there are bands out there doing incredible things, writing with thoughtfulness and depth, performing with every ounce of passion they can summon, and forever staying true to their own artistic desires.