Oxaï Roura is a creative composer like no other. His music is all at once varied and unique to a certain mindset; this is to say that the sound of each track, Afro-Himalayan 01: GanEshou in particular, has a definite and specific sense of style and direction, yet it incorporates so many different and unusual elements.

The soundscape is not the first thing to emerge, the solo spoken word performance steps out into the spotlight initially. The language used, if it’s not your mother tongue, doesn’t disrupt the experience – the emotional intensity of the performance, the tone of voice, the eerie atmospheric audio that follows, all leads your mind in a certain direction, and perhaps in a more powerful way than the simple portrayal of ideas via lyrics would. 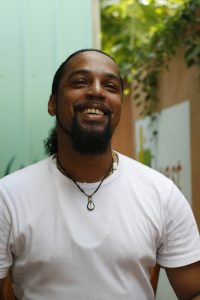 The leading voice is captivating, attention grabbing. The haunting snippets of an additional voice behind it add even more to the energy of the performance. As the musical moments begin to emerge, the sounds bring in an extremely original fusion of the organic, tribal world, and the modern, futuristic, electronic one. These two ‘worlds’, as it were, collide and combat each other behind the drama and feeling of the human voices. However, the collision becomes something more of a unity as the track progresses, and as is true with much of the artist’s work – the creativity appears as impulsive, free from the constraints of genre or structure rules, and most definitely driven by a passion for the strange and the unpredictable.

The more you listen, the more the thread throughout the sound becomes clear. The music begins to feel familiar, true to a certain set of ideas, and always audibly experimental and interesting. The artist’s own interest in spirituality passes on to the listener through his music. The energy and vibe of the recordings create a certain atmosphere around you as you listen, and it’s most certainly a memorable experience.