It sometimes becomes apparent that the majority of active musicians, on most or many local scenes, are paving their way through life and the minefield that is the music industry, by bringing a certain ability to mimic any and every song and style – the aim or impression being that there can then be no question as to whether or not they have talent. It makes sense, it’s a dog eat dog world in many ways, you have to stand on your own two feet and fight for what you want from life. The difficulty with this approach though, is that it becomes almost impossible to find those artists who simply bring art. There is value in skill, of course, and there is a huge value in performance and showmanship, but for those of us who appreciate and love the power of music and of words – there is so much missing from the average acoustic display.

Fortunately, we come baring great news, and even greater music. Mav Chamberlain is one of those artists who almost walks by unnoticed, a quiet name at the edge of your field of vision, but one that you will not soon forget – once the music has softly but surely leaped into your life. The songs are beautiful, powerful, smart, flawlessly performed and immensely skillful from start to finish. Nothing sacrificed, and so original and authentic that you just can’t help but listen. We took an in depth look at the four track EP Winter Tree, and following that, we took several more looks (listens), and it has now become a regular go to record for moments that require a certain amount of chaotic peace, or thoughtful reflection.

The Winter Tree EP has this immediate sense of beauty about it from the moment you press play. That raw, organic presentation of music and lyrics, combined with a stunning set of melodies, and the emotional ache of a captivating vocal – it’s a winning combination for music that really makes you feel something. Tidal Waves is the introduction to it all, and the personal touch of that soft yet passionate vocal really slides it’s way into your soul as you listen.

The imagery is superb, dazzling even, and the reflective nature of the lyrics, I’ve gone too far, I’m turning around, fuses so well with the artistry of the whole scene. Then you get this change, this interim, this cultural and musical shift – whereby the entire scene is altered, the atmosphere is suddenly quite haunting and other worldly. An incredibly clever representation actually, for a song that was written about someone who brings “chaos and strife into your heart”. The whole idea of a tidal wave is in fact a sensational way to paint this particular picture. After this, that beautiful chorus kicks back in, and the power of the song is evident – you remember and welcome it immediately. This is brilliantly creative and thoughtful song writing, with the wonderful addition of a characterful performance and a compelling leading voice.

The opening track is, in hindsight, a really interesting mix of the melancholy and the hopeful. The music has a certain sense of positivity in some ways. As the second track Imagining (Lullaby) takes to the stage, the feeling is more towards the latter – the wondering, the questioning, that thoughtfulness again shining so brightly. It’s a lullaby indeed, by all accounts, even for the more mature audience. It’s a soothing and peaceful song, with a simple melody that calls you towards it and causes you to sit back and think about the world. It’s a real pleasure to listen to. 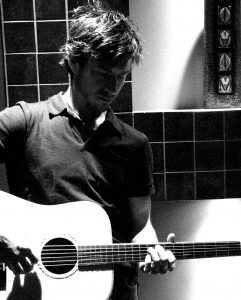 Carry The Load is again, in many ways, completely different to the previous tracks. The rhythm is one that gets right into your mind and your body, that sultry and seductive vocal, almost whispering, adds to this effect. I’m sick but I’m yours is just one of the immensely powerful and captivating lyrics found throughout this track. On top of everything. there is an astoundingly beautiful distorted guitar solo, which swiftly breaks away, ending the song, and leaving you in quiet awe of what has just taken place. By this point I’d be shocked and quite baffled if you aren’t completely involved and in love with this EP.

The closing track is Distance, a chaotic yet rhythmic instrumental piece, with swirling guitars and a simple beat that plays and plays, building and building, in an utterly hypnotic manner. It has the strange effect of making you immediately want to go back to the beginning of the EP and listen to the whole thing again. This particular collection of songs works so extremely well as an entity, as a whole piece of art, incomplete without it’s counterparts in some ways – the way we used to think of the idea of an album. I do wish it were longer, but perhaps it would take something away from the completeness of this particular work of art if anything were altered or added.

Fortunately, there is much more music in the pipeline for Mav Chamberlain. Details are at the bottom, and meanwhile – this is one of those of records that just works so much more effectively when you listen through headphones. Turn it on and turn it up. The voice, the melody, the lyrics – everything, just created and expressed in such a way – let it take over your head space for a while.

Mav Chamberlain is a multi-instrumentalist and song writer based in Canada. Over the Winter months of this year he plans to record and produce another acoustic record, which will be followed by a club tour across western Canada and parts of Europe in 2017. Find more music from Mav and his project Mericana over on Bandcamp. You can also find out more about him and stay up to date over on Reverbnation and Twitter. Those live shows next year will be unmissable. Acoustic music from the heart, bursting with soul, passion, emotion, and skill. Get involved.