It was a joy to write about Les Fradkin’s single Reflections Of Love last month for a number of reasons, not least of all that it categorically doesn’t fall into any single or simple category when it comes to style or genre. The prospect of an entire album from the musician and composer was, therefore, an exciting one.

Welcome To The New Age opens up with a title track that provides an intense wave of instrumentation, a leading riff that rises in intensity alongside of a somewhat calming piano piece. Then you move into Forward Motion and things really start to heat up. This second track has the manic beauty of a fairy-tale adventure at first, there’s a feeling of falling swiftly and excitedly down the rabbit hole. At times the music has a somewhat Irish Folk sounding display to it, some of the riffs used, the fiddle sound, and of course the rhythm, give off a very knees-up kind of vibe – the scales used in the melody are actually of Turkish descent. And yet, soon enough the music evolves into an almost trance-like electronic anthem, later returning again to its source. It’s a captivating piece of music that lets you explore the mind of the artist a little and the creative freedom with which he crafts his tracks.

City Lights takes the intensity a step further, this idea of being welcomed to the new age seems to take shape more and more as the collection progresses. In all honesty, you could leave the project running and completely indulge in the rhythm and the energy of it – much like you might with a classic dance album. The added benefit is that at no point does the music get tiresome or uninteresting, the general creative vibe of it all is consistently high and notably easy to forget yourself to. It’s music to make you move, to make you smile, and to draw you away from your troubles for a little while. And then if you choose to focus more intently on the building blocks of the audio, there’s a vast level of instrumentation and emotion and flair to sit back and appreciate. 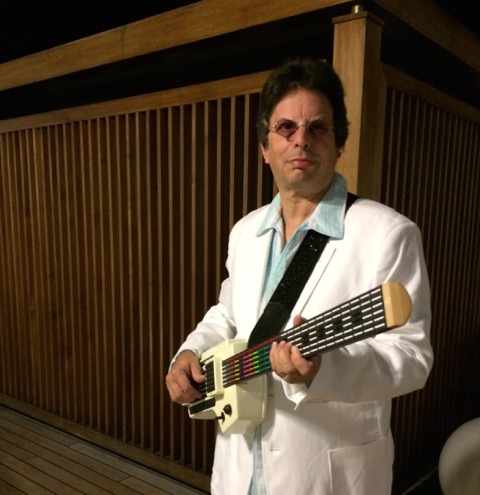 As you listen through tracks like Breathless, Dance Like No One Is Watching, and Fly Away With Me, it’s clear that there are distinct stories being told by these compositions. The tracks progress as a film would, the gentle and the intense, the highs and the lows – everything steps up to the mark at one point or another. You also get a consistently atmospheric thread throughout this part of the album whereby each moment leads powerfully and relevantly into the next. The manic riffs used in Fly Away With Me are beautifully chaotic, so much so that it’s hypnotic to let it play out around you.

Things mellow out a tad for the track entitled Evolving Light, an intriguing title backed up by beautifully dream-like piece of music. Then the ever memorable Reflections Of Love embraces you with it’s charm and peacefulness, a well placed couple of moments within the arrangement. Safari is again the sort of track you can rely upon to let wash away your stresses and keep you focused on the things that matter. It’s a well crafted and, as always, flawlessly produced piece that fills up the room with good vibes, as well as a much needed sense of adventure and possibility.

A similar feeling comes with the penultimate track of the project To The Edge Of The Universe, only this time the music has a somewhat mesmerising journey to take you on. The flickers of electric guitar throughout this one fuse so well with the ambiance of the synths and the general backdrop. The beat as well adds something powerful to the mix. This particular track is a highlight for sure. Another one you could listen to over and over and still get the same feeling of passion and freedom from. At such a late point within the project it makes for a strong reminder of the creative beauty that lay within.

Take A Walk With Me is the finisher, a mellow introduction, a slightly retro instrumental gathering, a gentle build up, and a very easy going progression that conjures up a feeling of peaceful completion. This entire album is far more of an experience than a collection to let play in the background, but the truth is it fits both purposes pretty well.

Welcome To The New Age is in fact Les Fradkin’s 22nd solo album. Experience is the key, and to witness the consistent and ever-creative presence of the new works is a total pleasure. Visit his Website for more information & music. Find and follow Les Fradkin on Facebook, Twitter & Reverbnation.