Last weekend marked the tenth anniversary of Weekend eau bord de l’eau – Sierre, Switzerland – in one of the most stunning festival locations of the entire world – Lac De Géronde. The weekend was a huge success, by all accounts – the weather was gorgeous, the people showed up, the music sounded great – loud, clear, beautiful, bassy – the good vibes were out in full force.

It was our first time at the festival – we were newbies, despite the significant anniversary of the event; but what a wonderful experience to be a part of. There was a lot to be excited about, but just for the moment – there was one particular event within the festival that completely blew us away.

The headline act on the Sunday, the final night of the weekend’s shenanigans; a hip-hop band named ASM – A State Of Mind. I’m a little ashamed to say I hadn’t heard much of them prior to the weekend, still – we all find the good stuff sooner or later, and rest assured – this one’s not a name you’re likely to forget; not when you’ve seen them do their thing.

It’s just after 10pm, Sunday night, the sun has just about disappeared over the mountains, the crew – the roadies – are setting up the stage for this band to come forward, and when they do – it’s just about everything you had hoped for, yet nothing you had expected at all. The rap duo, the primary voices of ASM, are backed and massively enhanced by the support of a live horn section – a trio of talented, sharply dressed musicians, and an equally passionate and energetic DJ – every single one of whom put forth an absolutely mesmerizing performance for their entire set.

There was, literally, not a single dull moment; from the very second they stepped on stage – the beats were big, the melodies and riffs were on form, the dancing – even a moment of tap dancing, no less – was brilliant, inspiring, the flow of those raps, the tone and character in the voices of the leading duo, just sensational – everything about this gig was insanely fantastic. I cannot recommend this band enough. 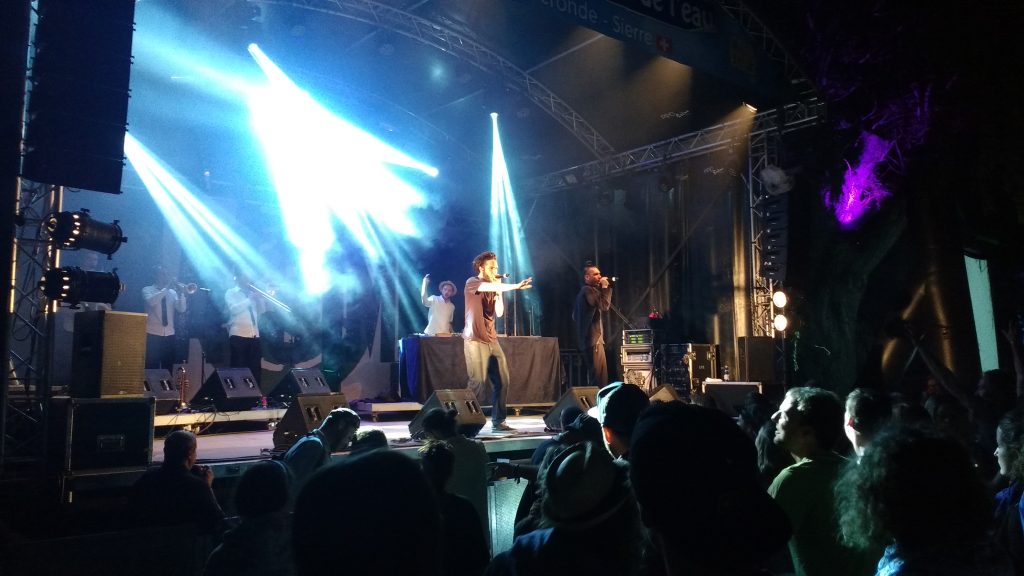 As it was the third and final day of the festival, the organizers were closing things down a little earlier than the prior nights, the crowd was a tad lighter than it had been on the Friday and Saturday, but it made no real difference in the end. The moment that music started to play, the moment the show started – and it is, undeniably, inescapably, a show – everyone was up on their feet, dancing like their lives depended on it. We rocked out close to the front, slightly to the left, close enough to see every expression, to feel every little beat and sound and emotion. It’s really not the kind of gig you sit at the back for. It’s the kind of gig that makes it OK to have spilled your beer everywhere. There will always be more beer.

The band are just incredible, and aside from entertaining you to the utmost highest possible level on the night, their music leaves you with a lasting impression – you’ll go home and download these tracks. You just will. The excitement of the music and the flawless theatrics occasionally distracts you a little from some of the lyrics, so you go home and you make those lyrics your own, in your own time – again and again. The depth and the meaning is there, it’s all over these tracks, and it joins forces with these often dark yet immensely bouncy musical vibes just beautifully.

It’s no secret that I’m a huge fan of a lot of underground hip-hop, plus, that funk-type sound is always a winner at a live show, but I’m shocked to have discovered these guys so late. In essence, this music is creativity on fire. The sound of the leading duo’s vocals contrasting yet fusing so well – the passion and the drama all play out so believably – it really is quite hypnotic to witness. An absolute must-see-and-hear, for fans of hip-hop, funk, live music, real music – anyone who loves something that is real; this is a band who have categorically mastered their craft. You’d be a fool to miss out.