Prior to the release of his brand new album Thoughts & Observations, we caught an interview with independent musician and songwriter Phil Cooper to find out more about what led him to this point and what his hopes for the future are.  Here’s the conversation in full.

Hi Phil – great to be able to chat with you finally! Congratulations on the new album. How long was this project in the making, and were there many songs that didn’t make the cut?

Thanks, I’m really proud of it. We (me and my brother, who also plays bass on the album) recorded and mixed it ourselves so were able to take our time to make sure everything was just right. I think the oldest song on the album was written about 18 months ago, but we started the recording process in August 2017. We concentrated on getting the recording as clean and polished as possible, and I hope you agree it was worth the effort. There was a few songs we had to cut, some because they didn’t fit the theme, and some because of the time restraints imposed by putting the album out on vinyl.

Did you decide upon a concept before writing, or did the songs just fit together under this general idea and title?

For me the songs almost always come first, before any concept, but sometimes I notice a pattern and that’s exactly what happened here. Because I’ve been happy in life over the last couple of years, I’ve found myself writing more about the world around me, and less about emotional struggles. I’d been planning to make the album eponymous, but when I thought about the album properly, the title Thoughts & Observations just kind of fitted.

What first compelled you to pack in your day job and take up music as a full time commitment?

It was mostly because I needed more time to devote to the management side of it. I’m a totally independent artist, and act as my own agent, label, marketing dept etc, and there wasn’t enough hours in the day to work a full time day job. Plus, people (strangers) kept assuming it was my job, which kinda made me think it would be a good idea.

What are your thoughts on the mainstream music industry, and would you say things have changed for the better in the independent world over the past decade?

Well I can’t really comment on the mainstream music industry, because it’s a totally different world to the one I find myself in. I’m 36, playing music that’s not particularly fashionable (even if it is catchy and likable). In terms of the independent scene, it’s huge now, and that can be a bit of a double edged sword. On the one hand it’s easier than ever to produce and release music on a budget, and make it available to the world. On the other hand, you have to work 100 times harder to make yourself stand out. There seems to be a reliance on the internet to make everything work, but I’m still very much about getting out there and playing live and making real human connections.

What have been some of your greatest tools in reaching a wider audience and progressing in your career as an independent artist?

Well I guess I touched on this in the last question, Facebook and Twitter are both amazing tools, but they each have their strengths and weaknesses. Facebook is a great way to remind people you exist, because it’s important that you don’t see “getting likes” as your end goal. You need to think about why you want those likes and what you plan to do with them. I see it as a way to keep people on board and make them feel a part of what I do. Twitter is very good for last minute stuff, in particular advertising tour dates. But the best tool is still collecting email addresses and building a mailing list. I do that with my doodle pad at gigs (getting people to draw pictures and sign them with their email address) and by giving away a tune in return for contact details. Most artists I meet these days totally ignore the mailing list as a tool and I don’t understand why.

What have been some mistakes you’ve made, if any?

Oh I’ve made plenty! I actually touch on one in the song Face Doesn’t Fit. Making money from music is notoriously hard, and it’s very easy to find yourself playing gigs purely for the money, to people that aren’t at all interested in you, they just want to hear someone playing Ed Sheeran or Wonderwall. While that might be good for short term cash flow, it’s never going to advance you as an original artist, and might actually damage your reputation, so it’s not something I do anymore, at least not under my own name! It’s a bit corporate, but your name is your “brand” and you need to look after it. 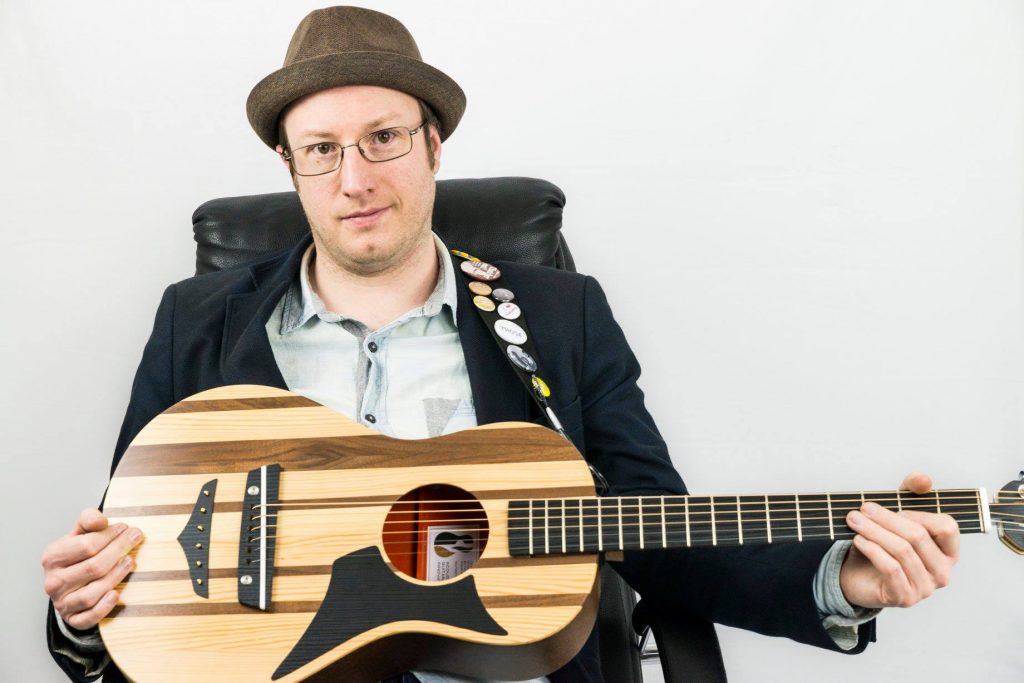 Which song on the album means the most to you personally, and why?

I genuinely couldn’t say, I guess there are some tracks which draw more from my personal experiences, rather than from examining the world. Road Songs, Face Doesn’t Fit and Only a Song spring to mind.

Which is your favourite to perform, and why?

This changes depending on whether I’m playing with my backing band (the Slight Band) or not. As a band, I’d say Shake It Up is just so much fun, and the audience love it because it’s so easy to join in. Solo I think Smokescreen takes the honours, because it has never failed to get a great response. For me, it’s all about how the audience is responding. I ‘write’ the songs for myself, I ‘perform’ them for others.

What makes a great song?

In my opinion, a song needs to be honest and accessible. Of course, there has been some great art and technically brilliant music that is challenging and difficult to understand, but in terms of a “song” it needs to connect with the listener. It needs to make them relate it to their own lives in some way. Plus it needs more than one killer hook!

If you could have written any song from throughout time, which it would be, and why?

Too many to count but certainly anything in the Crowded House back catalogue.

How important is live music and what can people expect from a live show from you?

Without live music, I wouldn’t be doing this, it’s as simple as that. Music for me is a social thing. If you look across history, it’s only VERY recently we’ve had access to recorded music, but as a live experience it’s been around since the dawn of time. Live performance will outlive any recorded medium. With that in mind, it’s important to me that my live show isn’t just a carbon copy of my recordings, the audience is a part of this one off experience and I want them to be involved. At the moment I do that through handing out egg shakers, sometimes I perform out among the audience rather than on stage. But I’m always thinking about new ways to keep the show fresh and personal.

If you could play any event or venue in the world, which would it be, and why?

The Royal Albert Hall would be pretty cool, I reckon I could put on a pretty special show. But the venue is relatively unimportant, it’s all about the people, I want to play anywhere in the world as long as it’s to as big a group as possible that want to listen and be involved.

What are your plans for throughout 2018?

Well the album comes out in April, and I’ve got a big UK tour planned to take that out and about, then I’m returning to Canada in Sept for my second tour over there. It’s an amazing country, and I’m delighted my Canadian fans want me to come back!

What advice would you give to creatives who are stuck in a rut or doubting themselves?

Don’t try too hard and make sure you surround yourself with people whose opinion you trust, who will give you genuine criticism. That way when they tell you something is good, you can actually believe them! It’s what I’ve done with the last two albums. My brother has been my sounding board as well as my bass player and recording engineer. Being my brother, he’s not shy of telling me when he thinks something isn’t working, and it’s helped me become more focused.

A quick plea to music lovers… The future of independent music is dependent on you. You are the reason that an artist will become “the next big thing”, so don’t be shy. If you like an artist’s music, tell people, share it and spread it as much as you can. At the grassroots level every individual fan can make a difference to an artist’s career, and every single one of mine is appreciated from the bottom of my heart.