Singer and songwriter John Hickman joined us this week to chat about his love for music and his album Remnants which brings together a collection of songs written over a number of years. It was a pleasure finding out more about his creative journey so far. Here’s the interview in full.

For those who don’t know, how long have you been writing songs and performing, and where did it all begin?

I have been writing songs since about 2008, and I started to make recordings of some of my original songs in 2010. Sometime in the early 2000s, I thought it might be fun to pick up and learn to play the guitar, just for fun; seeing other people play and enjoy it so much somehow inspired me and made me feel compelled to take up music as a hobby. After a while, I began to take things more seriously by venturing into writing my own material, and I worked on improving my vocal skills by using book/audio packaged lessons and one-on-one personal instruction.

What does Remnants mean to you as an album?

It’s a concept based on the Remnants of a society. Remnants of the Human Race, the semi-title track, is a sci-fi themed song about a human civilization forced to flee their home planet. So the songs on the album are an eclectic assortment that are meant to musically and lyrically represent the remnants of that race of humanity. Kind of like sending out those sample audio recordings of humankind’s music and other forms of entertainment and communication out into space on, I believe it was, the Voyager spacecraft.

The songs were written over a period spanning several years, even though they were all recorded within the last year, 2016. Actually, a couple of the songs had originally been recorded a couple of years ago, but those songs were revamped slightly with newer recordings for the Remnants release. I had been wanting to put together some type of album of songs to release over the last few years, and by the time I finally got motivated to record all the songs and put everything together, I had enough material for perhaps not two albums, but quite an extra long one.

What specifically prompted the creation of the song Remnants Of The Human Race?

A long-time interest in sci-fi prompted the creation of that song along with a desire to provide a warning about what could happen if we as a society are not careful in planning for the future. Also, there are not a large share of sci-fi themed songs out there, so I thought such a song might provide something a bit, though not unique, different from the norm.

The album has a huge sound, how did you come up with the instrumentation for the project – did you compose and perform everything yourself or did you have a band and a producer on board?

There were other musicians who helped out; I definitely did not do it all alone. The other musicians contributed primarily on guitar, bass, and drums. Keyboards for a couple of the songs were played by someone else, but I performed the vast majority of the keyboards for the album. I also composed all of the songs and performed all of the vocals, both lead and background.

Production was directed more at engineering the best sound possible of what I had envisioned, as opposed to someone taking my raw material and reshaping and rearranging each song into their particular vision. I had come into the studio with fairly complete demo recordings of each song that provided good references of the kind of sound I was after.

Your music has a very classic and warm feel to it, fusing a little of everything from a seemingly simpler time in indie rock and pop. Who inspired you to start making music, and who do you listen to more recently that keeps the fire burning, in your opinion?

Most of the time, my influences include the classic rock greats I grew up listening to, like David Bowie, Styx, Rush, Zeppelin, and The Beatles. The song Hello Hello, is definitely reminiscent of the Beatles, but While Everyone is Sleeping, on the other hand, reflects more contemporary influences like Green Day. I’m also a fan of Coldplay, and they have been a significant influence, especially as I began to integrate more piano and keyboards into my music.

What’s your opinion on modern music versus the big names from the 1970s?

Some of the more contemporary music I can live with; but I’m sorry, I still prefer the music of the classic rock greats. So hopefully, there are people out there who are looking for something “retro” that might be interested in the type of music that I am creating.

Which song on this project means the most to you, and why?

They’re all very important and unique in their own way, but Cascade deals with the interconnectedness of humans and nature and the spiritual realm, and much of the ideas used in it came through to me in a dream, which adds to its sense of being divinely inspired. Plus, the music feels energizing to me.

Some of your songs are incredibly warm sounding, others come with a certain touch of melancholy and concern – Escape comes to mind in terms of the latter, though this album in its entirety undoubtedly deals with a range of unsettled emotions and ideas. How do you begin when writing a song, what’s the process like, and how do you know when something is finished and ready to share?

It usually just starts as a small spark, some idea that pops into my head. Then I can work it further either by giving it more thought or sitting down at the keyboard to come up with ideas to refine the music. I usually don’t write the lyrics simultaneously while working through the music; the lyrics are usually worked out separately, but with the accompaniment and rhythm in mind.

I feel each song is complete when it sounds like nothing else is needed in order to complete the song, or that adding anything else would make the song too long or crowded. And lyrically, I feel it is complete when everything is said that needs to be said in the most artful way possible.

Do you ever write anything that is just for yourself, with no intention of releasing or sharing it? For personal clarity maybe, or just for enjoyment?

All of the songs pretty much start out that way, just for fun, to test them out, but then sometimes, after a song gets developed, it may not have quite the impact I had expected, so it would then be put aside; possibly reworked, but most likely not. 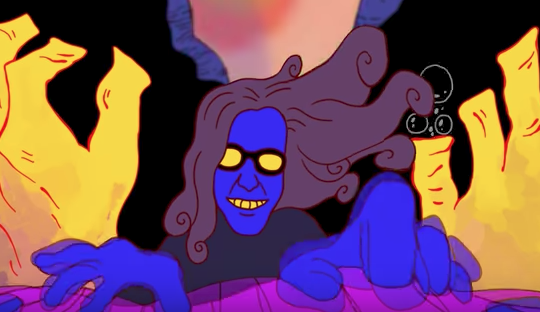 What’s the story behind the visuals in your video for Cascade?

The video’s animator, Micah Buzan, can best answer that question, so here’s a statement that he made regarding the visual themes in the video:

“We used the lyrics of Cascade as a starting point for all the visuals. I wanted to show the interconnectedness of nature through motion – from the rain falling down, to the sea animals swimming around underwater (and in space)! John also appears in the video a few times as an extension of nature. Humans are just as much a part of nature as all the other animals, even though we often think of ourselves as existing outside nature.”

What do you hope to achieve with this album, and do you feel any differently about the songs now that they’re essentially in the hands of the audience?

I hope that many people can listen to and enjoy this album and find something out of it that really excites them. I don’t seriously think that I will achieve any type of stardom with this album, but I at least hope that this work will be respected and taken seriously.

I don’t think I really feel any differently about the songs now that the album is being played to a public audience. My current feelings on the songs haven’t changed and probably will not in the near future.

What are your plans for the coming months and throughout next year?

I am planning to release a new album within the next year. I already have 10 songs in the latter stages of development that could be taken into the studio and polished up in the near future.