Devin Leslie is a song writer who crafts his art entirely on his own terms. His recently released album Love Like This is referred to as the world’s very first trap-folk album. The songs on the project are written in a poetic and captivating manner, yet on top of this – the sound of the music, and the performance, adds something really new to the mix. We caught up with him to dig a little deeper into the creative mind of the artist. Here’s how it went.

Your album Love Like This is what you’ve described as the first trap-folk album in history. As a relatively new term, it doesn’t conjure up any particular sounds or styles, but when listening to your music there’s undeniably something very fresh and unusual about the sound. This is part of what makes it stand out, and I suppose that gives it the strength to exist under the name of an entirely new genre.

Was this an intentional move, or did you find yourself creating music for the love of it, and then realising you were somewhere between styles? Where did the term come from?

Love Like This is definitely the first trap-folk album in history. The first trap-folk single came out in the summer of ‘15 and was called Autumn Wind. That was when the idea started to take visceral shape. At that point it became an intentional move to push the sound forward, but it wasn’t something I planned. It was something I was searching for and then found.

I started writing seriously at around sixteen, mostly on the guitar. But I’ve always been affected by all kinds of music, it struck me early on that the only real differences between any of the ‘genres’ was marketing. There were Eminem lines and specific 50-Cent phrasings that gave me chills around 8 or 9 years old, and around fourteen and fifteen Bob Dylan lines from Blood on the Tracks or Knocked Out Loaded were hitting me in a way that wasn’t so different.

At the time I started really coming into the trap-folk sound I was just absorbing a lot of the hip hop coming out around 2014 and 2015. The trap drums and snares from Atlanta were coming into mainstream music heavily and there was a general shift in the rhythms I was hearing that started to have an effect on me musically.

I never intended to be a guy with a guitar and I don’t listen to any modern folk or rock or anything like that. So I got with my producer and, soon, Autumn Wind came out. The reason it works is because it developed organically. It’s a sound only I have in my head. It isn’t one sound, and it isn’t ‘Trap’ and ‘Folk’ mixed – it’s just a moniker to give to the Devin Leslie sound.

There’s a very specifically-measured mixture of digital production and organic instrumentation. It’s also the Indianapolis sound. I’m the first artist from Indianapolis to really be pioneering music like that and latching on to the vibes of growing up in the city and translating them into a sound. I’m coming up at the same time the city is coming up, and it’s all there in the music.

How did the title track for the album come about – what was your thought process at the time of writing, and do you still feel the same way when you listen back or perform it now?

The title track was meant to be self-explanatory, as if there were a colon after it. It exploded in my head really loudly one day after I stopped searching for album titles. I don’t really like album titles, unless they just happen like that. I’m not really a thematic-album type of writer. Each song has it’s own beginning and end. So, Love Like This is both a command and a regular statement. It could be instructing you to love a certain way, whichever way you hear on the album, or it could have a colon after it, like I said, and the songs are just sitting there as a record of what happened. In other words, the songs are the ‘THIS’.

Now, how I feel about the album, I don’t really feel a certain way about it. I definitely don’t spend a lot of time listening to it, sort of like an NBA player who leaves it all on the court. That kind of philosophy. It exists on its own now. I haven’t performed it live since before we released it, so I sort of got that out of my system before hand. It’s a very intimately-vibed album, with sort of a darkish red and purple color to it, and I probably won’t be performing those songs anytime soon.

How important to you is performing live – do you think it’s still a huge part of getting your music out there, or do you think the internet is a more direct way of reaching a wider audience? Do you enjoy performing, and what’s been one of your most memorable gig experiences to date?

The way I make music, and where I’m going with the music, I don’t feel performing live is important at all. A concert is one to two hours and no one in America has that kind of patience anymore. It’s really starting to become an antiquated process, almost like theater must have started to feel after motion pictures were invented. Not that any of that is a bad thing. People can see you all the time, they can see everything all the time on their phone, and they don’t understand what’s happening up on the stage, or the importance of it. The paradigm has shifted.

Now Kanye, Drake, they have really the only live show I’d be interested in going to, because there are so many colors swirling around. It’s like an architectural event and a light show. So to do that, you have to have a massive level of resources. When I get to that point I might consider performing live, but until then ‘Devin Leslie’ lives on the internet.

I did a twenty-show tour in ‘15-’16 and performed at bars and smaller type venues. It was a good experience for growth as a musician and it was a vintage feel that I wanted to capture. The best venue was a place called ‘The Verve’ in Terre Haute, IN, because you could tell the people didn’t expect what they got, and it was a small old-style bar set up with the stage at the back of the bar. Something about it was memorable. But for the most part I’m a writer, and I don’t feel any need to perform live too much. 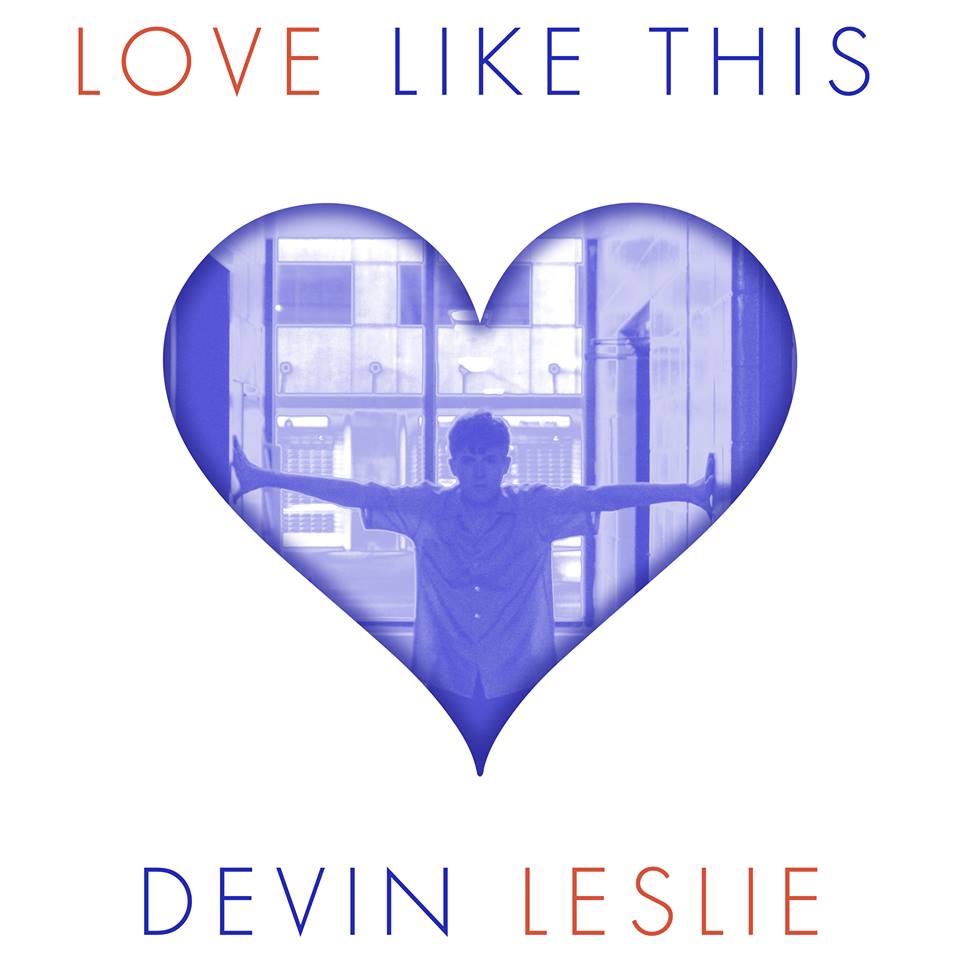 What were you listening to before you wrote these songs for the album – what are some of the songs or artists / bands that inspired you to create?

The main artist who originally inspired me to pick up a guitar and gave me a need to write was Bob Dylan. Starting with stuff like The Freewheelin, Highway 61 Revisted, Another Side, all of those albums that are considered classics now. Then moving into his whole career – I knew every word to every song at one point. There was a power and a tirelessness there.

Van Morrison had a big effect on me vocally and creatively, Leonard Cohen had a place. But really, before any of those artists, the first artist I really turned on to before any of them was Lou Reed, at around 11 or 12. That changed my life for sure. Years later by the time I was 17 and 18, Lil B The Basedgod changed my view of what art was in the digital age, in the age of information. Shout out to Lil B. He sort of set me into a renewed direction and showed me the power of positivity. Also he’s probably the greatest poet of our time, and a great person too.

Speaking of poetry; there’s a lot of unexpected lyricism in your music – you don’t put out songs that follow any suggested path or that are filled with clichéd formulas. It often strikes me as quite poetic. Are you a fan of poetry, and do the lyrics you write come before the melodies and the chords? Are they instant winners in most cases, or do you often find yourself re-writing and trying to think of something better – is it a stream of consciousness, or part of a much harder grind to get things to a stage at which you’re happy?

It’s all stream of consciousness. I’ve never sat down with the intention of writing a song. The whole thing, lyrics and melody, comes into my head at once. I write the songs in four or five minutes. There might be a little revision after, one or two words, but only if it feels right. Now the production, the sonic production, that gets fine tuned, and might take months.

As for the poetry, I was deep into poetry of all kinds in my high school years. I sort of went off on my own for a few years just to absorb as much poetry as I could. Now I see the poetry mostly in events, advertisements, colors, newspaper headlines, but at that time (15 or 16) I started to develop a great sensitivity to language. Which was a pivotal time.

I was very into Jack Kerouac, could recite whole books. There weren’t many schools of poetry or literature that I didn’t look into, especially in the English language. Now, I’m a victim of the age of information just like anyone else. But I learned at a time just before the technology had completely taken over.

Is there anything you’ve written that came from a particularly emotional place, which you perhaps now struggle to listen back to or perform – maybe you don’t feel the same way anymore, or it’s too hard to revisit, or it simply no longer makes you feel anything at all? How important is it for an artist to feel and appear genuinely connected to the songs they’re performing?

Love Like This – both the original version and the version from the album – is really a vibe which captures that whole feeling. That’s a generational song. Every one has felt that way or been through it whether they want to admit or not. They may not be connected to that place, but they’ve been there. In this time period we’re living in, certain old ways are dying off for us, and it’s painful. We have to evolve or be left behind. There’s a line with pain and on one side is intense feeling and on the other side is abject numbness.

What’s next for you – what are your plans over the coming months? Any live shows people can look out for, any new releases or side projects?

I’m always writing and my main vocation is songwriter. Right now I definitely have some new music in the works. There’s something coming people can look forward to and that will be updated on my social media accounts as always. So a new release of some kind is coming. Other than that, we’ll let things come in their own time. We’re looking for a private venue to host some rare “Devin Leslie” live performances. But I want people to absorb Love Like This for a while. It’s too soon to move on. It’s too early for the full meaning to be realized.

Read our review of the title track from Devin Leslie’s album Love Like This, and stay updated by following him on Facebook, Twitter, Tumblr and Instragram.