“Don’t want to feel ya, don’t want you on my mind.”  Well Jorja… the other night I felt every bit of what you were displaying. About a year ago, I was chilling with my best friend Luke, (most of you may know him as Lukey Lenz), and as usual, it was his turn to make the music selections. Since Luke has always had top of the line mobile speakers, when new tunes come on, you can hear every ounce of what’s being played. Whether it be the bass, the vocals, or any other aspect of the song – there’s no place for them to hide.

Due to the aforementioned, when sounds aren’t very pleasing, it’s painfully obvious, and when sounds are crisp, it’s one heck of a time. After about an hour of listening to his playlist, this very familiar song begins to play. It only took me a few seconds to realize it was Superman by Black Coffee, ft. Bucie. I’ve heard it so many times, as it’s one of my mother’s favorite house tracks. The first line of vocals began and I realized something was a little different. At this moment, my exact words to Luke were: “Bro, this isn’t Bucie.” He says: “Yeah, this is Drake ft. Jorja Smith. From that moment on I’ve been listening to Ms. Smith.

Jorja’s style is quite dynamic. Her voice glides effortlessly over minimalistic instrumentation, but she also has the artistry and spunk to deliver on tracks like On My Mind – a fan favorite. Last Wednesday I had the chance to see her live as her tour had stopped in Baltimore for the night. Chicago native, Ravyn Lenae opened up the show as she was just about a perfect fit for the vibe and energy of the night. Her band was down right funky, and they knew it too! Everyone on stage was rocking and on one accord. Lenae had a lit up sign behind her that read “Ravyn Lenae.” The sign’s font looked as if it was from a 1970’s skating rink. What truly impressed me about Lenae were two things, her sheer ability to sing, and her comfortability on stage. Her technique is one that she undoubtedly works on and fine tunes. Being that she is only 19, I think many young artists should check out her stage command and take notes, I surely did.

Once Ravyn had completed her set, the place was buzzing with excitement for Jorja to appear. After several moments of suspense, her drummer, bass guitarist, lead guitarist, and keyboardist all begin to walk on stage one by one. Then of course, here came Jorja. Photographer Madeleine McQuillan and I had both discussed/debated as to what kind of outfit she would wear. For some reason I thought Jorja would perform in tennis shoes and something simple, and Madeline thought the contrary. And yes, she was completely right. Jorja came out in a beautiful black dress, and red heels that single-handedly caught the crowd’s attention. I’ve been to many shows, and sometimes audience members don’t always focus on the stage the entire time. This may have been one of the only shows I’ve attended where it seemed as if everyone was completely glued to the stage at all times. 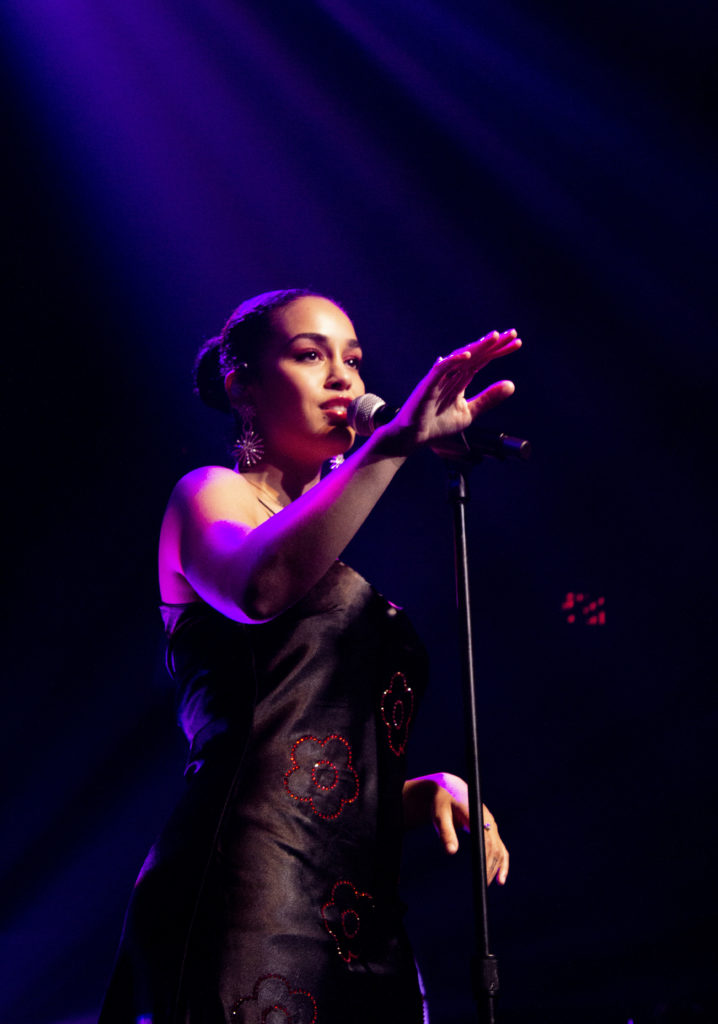 Jorja’s performance was somewhat of a process to watch. During the first few songs, Jorja seemed to really be warming up and adjusting to everything around her. This included the audience, ambiance, and maybe even the lighting surrounding her. This gave her such a humanistic feel as her presence didn’t seem fabricated or forced, it was all very natural. As the show progressed, she began to become immensely loose and ready to party. Baltimore was loving every bit of this, especially during her flashes of dancing.

Her personality shined brightly through her singing, smile, and connection with the music. This was a situation where you could tell Jorja knew every bit of what she was singing. These songs weren’t just sounds to her, they were stories, and stories that needed to be told thoroughly through the beholder. During the latter half of the show, Jorja completely walks off stage, and let’s her phenomenal band take over for a little while. Everyone had a chance to shine, but who stood out the most was her drummer. Femi Koleoso, the man on the drums was so precise and passionate with every beat on the drum. I couldn’t help but yell in amazement during his solo.

Jorja performed a few songs and then left the stage once again. We all realized she had not performed her hit On My Mind, and we just knew she had to be coming back. I don’t want to give away any more spoilers for those who might see her during this Lost & Found tour, but the way she constructs On My Mind will blow your mind. All in all, this was quite the solid performance, a 9.8/10 in my book!!! Jorja, keep being great!