Music enthusiast and journalist Kev McCready recently had the pleasure of interviewing Oranj Son, an established indie band from the UK’s own Merseyside. Here’s how it went.

I walk through the older, student areas of Liverpool on a cold, Friday afternoon. A long time ago, this would have been filled with Yesterday’s dreams. It’s now filled with empty boxes from Ikea furniture. Oranj Son are from Merseyside, emblematic of a city that has always been shifting like a lairy chameleon; but still trying to stand out from the crowd.

I meet lead singer Kieran in The Grapes, a pub in the midst of student country. It’s famed for its impressive collection of real ales, but also has a rep for muso clientele. Kieran is studying Chinese and French in Manchester, but has come back to Liverpool for a gig.

Oranj Son is a band with a skewed sense of reality for a twisted time in history. Their influences range from New Order to Alexi Sayle. Songs use fantasy and humour to explore much darker issues, with a sense of brevity and wit that some bands (New Order, for example) could do well to develop. How do they do it?

“Maybe I am writing about things I don’t want to write about. Certain formulas work better than others and there are certain ways of writing lyrics nowadays that deserve more… whereas previously I would have gone for lyrics that are more thought-stimulating. Some people think it’s erratic, but it’s maybe tricking people into thinking the lines are linked. If you can do that, you can make sense of it subconsciously. ”

So, is he fascinated by strange things?

“Not obviously strange things, you can change their context so that they become strange. I think wherever you go there are little things. Not that you should go reading things off street signs! That’s a bit Alan Partridge. You need to critically engage a bit, but it stops writer’s block. You can take little things from your environment, play around with it and see what makes sense.”

Kieran sees the band as a collective democracy, with everyone contributing. Recording sessions will see members changing roles, with ideas developed in an organic fashion.

“Most of the time we’ll discuss. Instead of sitting there and jamming, we like listening to music and deciding what directions to go in and work out things in your head before handling an instrument… we’re all in it together. Much as I like New Order’s music, it’s the way that they worked. Just because Stephen Morris wasn’t a very good singer doesn’t mean he couldn’t come up with a melody on the keyboard. It’s a democracy, in the way that everyone does a bit of everything.”

Kieran sees this approach of democratic comradeship as a fruitful one, with the gentle application of technology. How does he feel technology has changed their sound?

“If you have loads of technology, it shows commitment. They (labels) want you to sound as much like the finished product as possible. Because electronic music was seen as the opposite of that in the eighties, there were a few bands that combine the two. But I think nowadays, if people aren’t technically gifted, on an instrument, people can still work out where it is in their head and chase those ideas and reach them without technical ability, in an accessible sense. Electronic music has replaced guitar music in the sense of being accessible.”

There is a classic ‘Liverpool’ feel to the band’s sound. Nothing sounds like much else in the city at the moment, but I can hear elements of legends like Cook Da Books and The Hoovers in their sound. The band hails from Ellesmere Port, technically (but not quite) Merseyside. Is that something he has actively worked at, conscious of?

“I think you could go further than that, bands like Deaf School. In Manchester, The Fall. Just bands that were a bit odd. I mean, Sonic Youth are obviously American, but the way that they played guitars with dissonance. They just kind of kicked it through music and people accepted it, eventually a mixture of that filtered through and that’s what people in Liverpool were listening too.”

So, who are Oranj Son? Are they a Liverpool band? A Wirral band?

“We play Liverpool, because it’s a great place to play. At the same time, we know we’re not from Liverpool. We’re from Ellesmere Port, so technically we’re a Cheshire band. Say if Liverpool was a circle, it’s a clique, we stand over here. You need to have your own thing going on in the bubble, you know what I mean?”

So, in conclusion, a band with their own identity, working at singles rather than an album, where do they see themselves going in a year’s time?

“Keep improving, keep things moving. The songs we started out as playing, the way we do them live now, there’s a massive difference. But that’s just time spent; the more time we spend on it, the more we’re just chiseling at it, it’s by no means finished… Just because something is performed once, doesn’t mean it can’t grow.”

We compare iPods as the pub’s Friday clientele filter in. A student in the flat opposite comes out for a sly tab. What was the last song he listened to?

Oranj Son are a very real, original Merseyside band who needs your ears. A unique band with a unique way of working. Like Ikea furniture, you will take time to put the pieces together, but it will be worth it. 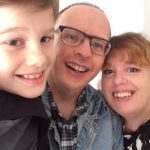